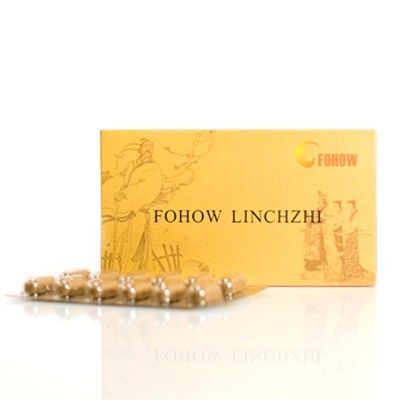 The purpose of use is to slow down the aging process, to regulate the nervous system, it has an anti tumor and brain bloodstream improving effect. Linchzhi is called “a plant of eternal youth”.

Since old times it has been known, that Linchzhi is characterized by “soul soothing”, “wisdom awarding”, “memory sharpness” effects.

The purpose of use is to slow down the aging process, to regulate the nervous system, it has an anti tumor and brain bloodstream improving effect. Linchzhi is called “a plant of eternal youth”. The ingredients of “Linchzhi” capsules include spawns and ascospores of Chinese Ganoderma – the most valuable kind of Linchzhi.

Cell membrane splitting technology helps to save the active ingredients of the raw material to the maximum, and high technologies multiply the absorption of the active components many times.

Usage: an hour before a meal (better in the morning), wash down with water.

Storing conditions: in a dry and cool place.

Chinese cordyceps together with the high quality fungus Linchzhi quickly supplies the brain with all the necessary stuff, enhance their functional abilities.

The preparation is successfully used in the cases of encephalon and spinal cord blood stream disorders, also after strokes.

When using the preparation the mood is improved, working capacity is increased. The preparation is useful for those who want to cultivate their memory, increase the intelligence and the abilities to study, also for those who study foreign languages.

Indications, doses and usage duration in the cases of:

Eyesight and hearing deterioration (especially for the elderly people): 1-2 packages, 1-2 capsules per day;

If capsules are used in the evening, sometimes sleep can be disturbed. Then it is recommended to take the preparation in the morning or in the daytime. At the beginning of the treatment (the first 2-6 days) it is recommended to take small doses of the preparation – 0,5 capsule, especially for the patients suffering from encephalon blood vessel atherosclerosis or after a stroke and in cases of mental affections. After the ischemic stroke the preparation can be used immediately, and after the haemorrhage stroke – after 4 – 6 weeks.

In the case of the migraine there two possible ways of capsule taking: during the migraine attack, one effective dose of the preparation is taken or an optimal dose is used for 1-2 months. In the cases of Parkinson disease, multiple sclerosis, also in cases of many other diseases, the preparation dose is increased little by little, until the most effective dose is determined and then used for several months.

One time usage is possible (when taking exams, in stressful, tiring situations, before some hard work, long car driving, etc.)

There should be mentioned a positive effect of “Linchzhi” on children having mental retardations.

Children can take the preparation from 1,5 years of age. They are prescribed lower doses according to the age. 3-4 year old children should take 1/5-1/4 capsule, 4-8 – 1/3-1/2 capsule per day. For children from 9 to 12 and older the dose can be increased up to 1 capsule per day. The following conclusion can be drawn – the preparation doses can be prescribed individually, and the amount consumed depends on the effectiveness results.

Linchzhi (Ganoderma) – is a very valuable representative of Chinese traditional pharmacology, having a popular name “Linchzhi herb”. An outside shape reminds of a kidney, it grows in the wild, absorbing the mysterious wisdom of Heaven and Earth. As in the old times with the help of “Linchzhi” they used to treat from hundreds of syndromes and illnesses, it had a popular name of “the herb of the immortal saints”: when using Linchzhi they used to raise from the dead in the direct meaning of the word.

Linchzhi is characterized by the ability to enhance the immunity, strengthen the health. It has a curative effect on many diseases, that are difficult to treat in other ways. Until now Linchzhi has been the only natural preparation in the traditional Chinese medicine, which is able to penetrate into all five meridians of the human organism (Heart, Liver, Lungs, Spleen, Stomach).

In recent years the percentage of patients suffering from cancer has increased dramatically, and cancer is treated in the methods and preparations intended to suppress the splitting and growth of cancer cells. Unfortunately, when using these preparations and methods there are many side effects. Linchzhi protects from side effects, and increases the curative effect. Modern clinical trial has revealed that Linchzhi contains a lot of Linchzhi acid and organic germanium, which are able to kill cancer cells. Linchzhi can suppress the metastasis of cancer cells, it is characterized by a painkilling effect and the ability to prolong life. Today Linchzhi is the most effective natural remedy of cancer treatment.

Linchzhi ascospores are rich in protein, amino acids, polypeptides, polysaccharides, terpenes, vitamins, biological alkali, organic germanium and other useful components. It improves the patients’ suffering from tumor diseases tolerance to radio and chemotherapy and operations, it also helps to overcome the reduction of leukocytes in the blood and lack of appetite, which is caused by operations and radio or chemotherapy. It increases the patients’ immune function and resistance to tumors.

Chinese cordyceps compares to ginseng and velvet antler. Cordyceps is also attributed to TCM “Chinese pearl trio”. Especially Chinese cordyceps growing in the west, in the Tibet mountain range and Tibet Shanghai plateau Cordyceps is covered by secrets and legends. It is really a pearl of traditional Chinese medicine and pharmacology, because it is both a plant and a living creature. Traditionally it is called “insect-herb”. The life cycle of the Chinese cordyceps takes place under and on the ground, also in summer and winter for several seasons.

In the pharmacy collection of Chinese herbs and plants “Ben – coa – shi – i” it is said: “Cordyceps penetrates two meridians – lung and kidney. It treats hundreds of deficiencies”. Since ancient times cordyceps has been widely used to cure cough and asthma, kidney deficiency and a general weakness of the organism. An especially clear effect is observed in the cases of bronchitis, chronic cough, general weakness of the organism, susceptibility to colds, mail impotence, prospermia, etc. One can find a lot of information about cordyceps in the old sources of classical Chinese medicine.

In the pharmacy collection of Chinese herbs and plants “Ben – coa – shi – i” it is said: “Cures lung deficiencies, blood coughing, cough, kidney deficiency, prospermia and spermatoria, hundreds of diseases and deficiencies”.

Linchzhi capsules have a double summative effect – of Linchzhi and Chinese cordyceps. This is how they work: slow down the development of tumors, strengthen the heart, protect liver, regulate blood pressure, reduce the amount of sugar in the blood, eliminate tiredness, slow down the process of aging, have a soothing effect, improve the quality of sleep, etc. They strengthen the body, stimulate the production of sperm, regenerate from inside and outside, help to extend the age, retain the youth of the organism for long.

It is recommended for middle age and elderly people, exhausted by diseases, in after surgery rehabilitation periods, during chemotherapy.